Okay, this is just between the two of us. You have to promise not to let anyone else see this monstrosity. I'm letting you see the photo of me with a bald head.

There is a bit of a story behind this. If you've been reading this blog, you know that I have hair issues. I have alopecia, an autoimmune condition that causes hair loss. It sucks. Through visits to multiple doctors I've had blood work and skin biopsies, only to find there is no cure. My hair has disappeared in ugly chunks. And just to make things a bit more lively, a recent skin biopsy on the top of my head showed that I have squamous cell cancer on my scalp that requires surgery. Because my hair was falling out, and because I need to have my scalp surgically messed up, I initiated a pre-emptive strike and got a buzz cut. Chris, a guy I'd marry if he wasn't already married, cut my hair (#2 clipper guard) and pronounced that I looked "fierce". Fierce is better than pitiful, better than helpless or sad or whiny. The photo is my attempt to put on a fierce face just after my head was shorn. To me it seems more the look of a woman who is leaning toward angry resignation when she would rather be fierce. What expression do you imagine Joan of Arc had as her captors lit the fire about to consume her?

The fierce phase has not been fiercely executed. I wander from fierceness to shame, days spent in hiding. For several weeks I have done what I call Mass for Shut-Ins--watching the Sunday church service on the Internet. But today I went to the morning service with a hat on. The hat got hot. I went to see my mother after church, refusing to remove the hat. I forewarned her, but she didn't really understand until she saw it. My mother saw my head a couple of weeks ago, screamed, and said, "I can't stand looking at you!" Nice. Now the hat stays on, no matter how much she begs me to see my head. This condition doesn't work well with my mother's obsession with appearance. Her obsession with hair is pathological. How ironic that she would get me as a daughter.

Tonight I went back to church for the 5 p.m. service. I took my hat off in the car because I was just too doggone hot. Still feeling the shame, I sat in a dark spot in the last pew in the church, rows away from anyone else. Alex, one of our pastors, came up to me in my hiding place in the back and asked me to do the wine at communion. I sucked air, said I was trying to hide my bald head in the back. He was going to let me off the hook. But, in an uncommon burst of courage, I said, "No! I'll do it. There's no better time or place to be bold." 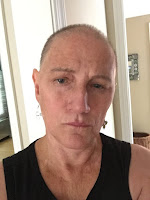 Yes, I did it. I held my bald head high and walked to the front, under the bright lights for all the world to see. And I did feel emboldened, like God could see me and He still loves me. Giving up the deceit, the hiding, the fear and literally letting myself be seen with a flaw that humiliates me, has set me free. Only through the grace of God could this have happened, in His house, in His time. I may still lose confidence on occasion, I may waver between fierceness and shame, but fierce feels better.
6 comments:

24 And Jacob was left alone. And a man wrestled with him until the breaking of the day. 25 When the man saw that he did not prevail against Jacob, he touched his hip socket, and Jacob's hip was put out of joint as he wrestled with him. 26 Then he said, “Let me go, for the day has broken.” But Jacob said, “I will not let you go unless you bless me.”


Claire asked me if perhaps I was not able to communicate with the Lord because I was angry with Him.
“Good point,” I replied. “Sometimes I’m afraid to be angry with Him when I should have nothing but gratitude.” And I recall the line from Ted Loder’s prayer in Guerillas of Grace where he says, “I wander somewhere between gratitude and grievance.” Between gratitude and grievance—that space that feels so familiar to me. Always a little angry, a little guilty, a little frustrated, despite my desire to live in a never-ending glow of love and gratitude.
Claire reminded me of the passage in the Bible where Jacob wrestles all night with a man he first thought to be an angel. Later he realizes it was God himself wrestling with him. Jacob needed rest, but instead he spent the hours fighting with God, ultimately to find his faith strengthened. If Jacob could wrestle with God, then maybe it was something I should consider.
A few years back there was a musical on Broadway called, Your Arms Too Short to Box with God—unfortunately I never saw the show but the title was memorable enough and the image of a person trying to box with God, and failing because of short arms, obviously stuck with me. The phrase originated in a poem by African American poet James Weldon Johnson, who in a poem entitled The Prodigal Son wrote, “Young man—Young man—Your arm’s too short to box with God.”
So, with intention, in the privacy of my own home, I had it out with Himself. I sat on the sofa and spoke aloud, telling Him (as if He was hearing this for the first time—it is to laugh) everything that pissed me off in the history of my long life. I started with my grandmother dying, through the horrible dissolution of my marriage, to my present day bald head, and lots of other things among those highlights. He sat there and took it like a man. And I felt as empty as I felt after giving birth.
I wrestled with Him and He blessed me. The struggle left me feeling deep peace and a renewed faith. He didn’t care that I purged all that anger and shook my fist at Him. He just loved me, loved me in spite of my tangled human frailty. He loved me through my brokenness and ingratitude. He loved me despite my mistaken belief that I deserved something better than what He gave me.
His presence, His love, His never-ending patience was the only thing that was left. Gone the anger, the resentment, replaced by enormous love. And I realized that He is fighting with me, not to give me what I think I deserve, but to give me something much more than I deserve. He gives me a life better than anything I could imagine. His presence is so tangible sometimes, His love so real, that it takes my breath away.
2 comments: