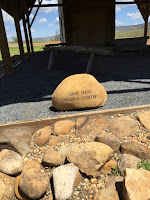 Thanksgiving was the best I can recall. I am so  . . . thankful. I had the glorious opportunity to spend a few days in Austin with all my kids and grandchildren. My heart is full.

During the visit, in the middle of an ordinary conversation with my daughter and son-in-law, I felt compelled to throw in something about death.
“ . . . Barton Creek might be a nice thing to do tomorrow,” said my daughter.
“Not to change the subject, but I’ve changed my mind about cremation,” I blurted out. “I read that it’s really not good for the environment because it uses too much energy and can create noxious fumes.” The fumes from my cremation could be more noxious than most. I don’t want to be blamed for polluting the air.
I explained the natural burial concept. At Holy Cross Abbey in Berryville, Virginia, where I’ve gone on retreat, the Trappist monks maintain a natural cemetery on the property. Burial there involves no embalming. The unembalmed body is either put into the ground in a plain wooden coffin that will disintegrate with the corpse, or the body is wrapped in a simple linen shroud and dropped into the earth. I like the linen idea. (I once read that after her husband Alfred Stieglitz died, Georgia O’Keeffe stayed up all night to rip out the tacky satin lining from his coffin and replace it with white linen. That alone says so much about her.)
At the natural cemetery, the body, wrapped in a linen shroud, is buried in sacred ground, either in the meadow or in the woods, within view of the Shenandoah River. The grave is marked with river rocks engraved with the name of the person in the ground below. I have seen this cemetery and walked in the woods among the stone-marked graves. It’s quite serene and lovely.
My thoughtful son-in-law suggested an even simpler option. Apparently, somewhere near San Marcos, Texas, there is a place called the Body Ranch where bodies are left out in the open, naked and resting on their backs, to decay naturally. The natural decomposition process is studied for forensic research. There might even be a body left in a car to study the particular details of decomposition in those conditions. I wonder if they try different makes and models of cars. Does a body decompose differently in a 1967 black Ford Mustang than in a 2012 Olds Cutlass? This Body Ranch alternative does not appeal to me. I’ve seen the pictures.
My beloved daughter and son-in-law then carried the discussion to another level. They maintain a compost pile in the back corner of their property. It was suggested that I might saunter on out to the compost heap until I die. No fuss, no bother, just walk down there and wait. I expressed concern about vultures. No problem, they’re bird watchers. Just consider me a feeding station.