The evolution of distraction

It’s New Year’s Eve. I’m sitting at home, listening to jazz, eating leftover cassoulet, drinking red wine, and thinking about distraction. I’m having a hard time concentrating on the distraction issue. I keep getting up and walking downstairs to see if my laundry is done. Then I go into the kitchen and check out what’s in the refrigerator. Then I go back to my writing but forget what I was doing. Maybe it’s the wine or maybe it’s human nature. I’m developing an anthropological treatise on how we have become more and more distracted over time and with technological advances.
Oh, and by the way, I’m thinking about painting the guest room—how do you think lavender would work?
Perhaps we mortals can blame our distractible nature on The Fall. In the early days, after the rib extraction, Adam and Eve must have given one another their full attention. They probably walked around the Garden of Eden discussing books and music and the wonders of God until they bit into the accursed apple. They were not distracted until they fell from God’s grace. Then all hell broke loose and we’ve been on a downhill slide ever since.
I don’t think we were so distractible when technology was simpler. For example, before Verizon invented call waiting, we simply talked to someone on the phone until we were finished. Now we get interrupted all the time by people taking polls on our grocery shopping habits. (I think they’re lying—they aren’t taking polls, they just want to see if they can link my toilet cleaner preference with my political affiliation.) One person I will not name, but who happens to have given birth to me, tells me to hold on but she forgets I’m holding on. She’s nearly 86 so she’s excused.
Then there are the people who respond to every ding on their cellphones and text message during soulful conversations about the meaning of life in relation to the age of toilet training. They say, “Go on, go on, I’m listening.” But I know they aren’t, especially when they nod and smile like a psychoanalyst when I say, “I’m into self mutilation and last week I gnawed off my left arm."
According to my theory, what do I expect to be the next wave of distraction? I figure it’s going to be something like this: I’m on my deathbed saying something deep and meaningful to my granddaughter when a hologram image of her friend Imogene appears in the room. Imogene tells my granddaughter that she simply must come to for lunch. At which point, my granddaughter explains that she’ll just be gone for a couple of hours and she teleports herself to .
Then again, maybe I should paint the guest room a deep caramel color.
Happy 2012!
2 comments:

I spent the evening doing Josefina's hair over and over again. Actually, there are two identical Josefinas in my house at the moment and they both have long, thick black hair that goes from sleek to a rat's nest in mere seconds. They are especially prone to getting their hair tangled when they are picked up by their hair and flipped upside down.
The Josephinas are American Girl dolls, the wards of my twin 5-year-old grandaughters, Harper and Lucy. The girls (and the dolls) are visiting from Texas. Today we went to the American Girl store, where we had lunch reservations, and where the dolls got their hair done in the store's salon. The dolls were seated in small pink salon chairs and draped with miniature plastic capes to protect their clothes. The girls picked hair styles for the dolls and the stylists (I wonder if they have to be licensed by the state cosmetology board) redid their hair with twists and braids and tiny ribbons and pony tail holders.
We weren't even back to the house before the dolls' hairdos were destroyed. So tonight, while the parents of these girls went to happy hour at McKeever's Pub, I stayed home as the designated doll hair stylist. I brushed and braided and revised the styles several times. But the final result was fabulous. Harper's Josefina got two traditional braids. Lucy's Josefina got a thick side braid, interlaced with red for Christmas. Lucy said what I did with her Josefina was better than any of the dolls she saw at the store. She suggested that I get a job as a doll hair stylist at American Girl. Brilliant idea, eh? I never would have thought of that before today, but perhaps I finally found my calling.

Elizabeth and His tender mercy

Indeed, the story of Mary, the teenaged unwed mother chosen to be the mother of the Messiah, is amazing and inspirational. Her unquestioning faith is exemplary.
But what about Mary’s cousin Elizabeth? In Scripture Elizabeth is referred to twice as being “advanced in years.” I figured that being “advanced in years” in the year 1 BC was probably something like 30 years old. Girls got married at 13 and it seemed likely that they were considered old by the time they were 30. So I looked it up and found that biblical scholars think was well beyond the usual childbearing age, probably in her 60s. Holy Mother of God—instead of getting an AARP card, she got pregnant! In the year 1 BC it took the Angel Gabriel to facilitate a pregnancy where even IVF clinics would fail today.
Like her cousin Mary, had remarkable faith. And unlike her husband Zechariah, she was not bitter about her childlessness and she didn’t doubt God’s plan. She joyfully, with humility, accepted the news that she was going to give birth to John the Baptist, the forerunner of the Messiah.
I become a little weak in the knees when I hear this story because I’m about ’s age at the time she gave birth. I probably would have bristled at the news that I was going to have a baby when I’m so “advanced in years,” even though the child was destined to have an important role in the life of Jesus. (I guessing the angel didn’t tell Elizabeth and Zechariah that their son was going to be beheaded—it might have been a deal breaker.) But here’s the part that gives me hope—even though was growing old, God was not yet finished with her. He answered her prayer and used her to accomplish something very important.
In the words of Zechariah (Luke 1:74-78)
. . . that we, being delivered from the hand of our enemies, might serve him without fear,
in holiness and righteousness before him all our days.
And you child, will be called the prophet of the Most High;
for you will go before the Lord to prepare his ways,
to give knowledge of salvation to his people in the forgiveness of their sins,
because of the tender mercy of our God.
Even when we’re old—maybe especially when we’re old—we can rely on the tender mercy of our God.
No comments: 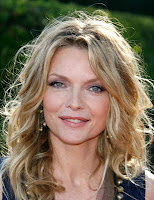 Don’t laugh—I’m doing cognitive therapy on myself. This means that I’m prodding myself out of my current malaise by using mental affirmation flashcards. (Don’t even ask about the malaise. Suffice it to say it’s a combination of seasonal affective disorder, grief, and general ornery-ness. There’s probably a diagnostic code for it. I have a graduate degree in counseling psychology so I’m entitled to diagnose myself.)

These affirmation flashcards are not tangible things, not like the picture of the zebra with the letter Z that you show your preschooler. But perhaps they should be. I could use photos to accompany the affirmations in order to reinforce the message. Here are the affirmations I’m working on:

(1) “I am who I say I am”—this is to remind me that no one else defines me—no former husband who mistreated me, no boss who devalued me, no Republicans or surly plumbers or cosmetic salesladies. For this one I’ll attach a photo of Michelle Pfeiffer and hope that my powerful positive thinking will make me look like her.

(2) “Cherish yourself”—I’m already having trouble with this one because there seems to be a thin line between self indulgence and self preservation. But what I mean is that no one else is going to take care of me, no one else is going to make sure I eat right or get enough exercise. For this flashcard I’ll attach a photo of Miss Piggy.

(3) “Live today like it’s your last day”—I’m having trouble with this one too. It scares me. It doesn’t make me want to fly to Paris; it makes me think I need to clean my closets and get my affairs in order so my kids won’t curse me when I’m gone tomorrow. They’re going to say, “Why in the hell did she need 146 cookbooks?” That’s it—the cookbooks are going to Goodwill tomorrow along with the 146 pairs of jeans that don’t fit. With this flashcard I’ll attach a photo of Little Edie. (I’m still obsessed with Little Edie.)

(4) “Get off your ass”—this is self explanatory. It’s really card 2, part b. I need serotonin, vitamin D, and liposuction. I need residental addiction treatment—carbohydrates are my version of crack. For this card I’ll attach a photo of myself sitting on the sofa, wearing sweats, eating popcorn and drinking a beer. Nooooo! Quick—flash back to the picture of Michelle Pfeiffer—I am who I say I am, I am who I say I am . . .
No comments: