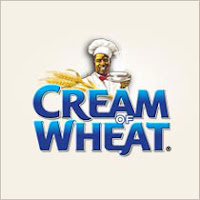 How low does a writer have to go to write an essay on farina? How much of total nerd does it take to even spend time thinking about it? Guess I’m about to find out.

A few days ago I was in the grocery store and overheard a young clerk tell an older clerk that a customer was looking for farina.
“Farina,” the young clerk said, “I have no idea . . . “
“Aisle 6 on the left, about halfway up the aisle,” said the older clerk, “on top, above the oatmeal.”
I chuckled and the old guy just grinned and rolled his eyes.
Wasn’t Farina related to Buckwheat? Who came up with the names of those characters in the Our Gang television series? Farina and Buckwheat were two of the little black kids—but who was Stymie? The show was equal opportunity when it came to stereotypes because it had black kids, a fat white boy, a whiney white girl, and a bully white kid. I’d love to see that show again. I’ll bet it’s not hard to find it online. Anything you want is on YouTube. (I recently watched a clip from the Milt Grant show—but that’s another essay on yet another important topic.)
But seriously, farina is a food grain and we Americans know it as Cream of Wheat. Look at the box and it will say exactly that—Cream of Wheat (subtitle Enriched Farina). It was a staple of my childhood—a warm, comfort-food breakfast. It was never, ever the quick-cook variety in the packet. Hell no! You had to cook it in a saucepan with water (or milk if you were feeling frisky) and a dash of salt. You had to pour the dry Cream of Wheat carefully into the boiling water and stir continually to avoid lumps. You had to cook it in the saucepan because you needed to learn the value of hard work and discipline by scrubbing clean the saucepan encrusted with Cream of Wheat that turns into cement if left to dry. You did this after digging potatoes in the garden, butchering a chicken, and before walking 5 miles to school with no shoes. Or pants. We didn’t wear pants but we wore little lace things on our heads. Or a folded Kleenex held on with bobby pins if we were desperate.
Oh, wait, I forgot I was writing about farina. A little break from our sponsor, that pesky attention deficit thing.
My children grew up loving Cream of Wheat but their favorite part was the lumps, so much so that they would request it cooked with lumps intact. They were creating their own tradition.
I’ve been sick and downtrodden. Life is hard. So I’ve been eating Cream of Wheat, chicken soup, and ginger ale. I will get better, things won’t always be so hard. And now I can say I’ve reached the pinnacle because I’ve written an essay on farina. Anyone want to buy my book?
No comments:

Living in the basement

For the past couple of weeks I've pretty much banished myself to the basement. Now I've got a cold, which gives me a legitimate reason to withdraw from mankind, but I was withdrawing even before the cold. I haven't been writing or cooking. Though I have been praying sometimes, saying, "Lord, what the blazes am I doing down here on the basement floor all day long?" I ask Him questions. He answers with more questions.

I have a pretty good idea what I'm doing. I'm trying to get lost doing something tangible, just sitting in the basement painting and grieving. I figure if I work really, really hard doing something that takes my mind off the incredibly sad things in my life, maybe the days will pass and I'll have created something. Plus maybe I can make some money to buy that new sofa I need.

Several weeks ago I began painting furniture that I already owned. At a store in Falls Church I found Annie Sloan chalk paint and waxes. My imagination went into overdrive. When I had painted everything feasible in my house I began going to thrift stores, then Craig's List, then to the back sheds at antique stores that have the really grungy stuff. You know--the pieces that are mildewed with spider nests and creaky parts. Those are the pieces I love the most. I've stripped off some horrible upholstery and I've glued and scraped and painted. And painted and painted. Now I need to sell some of this stuff to reclaim my basement. Here are some of the photos of what I've done. 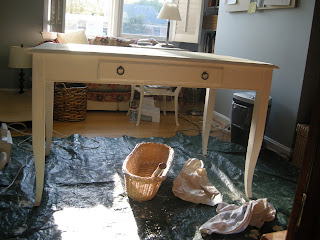 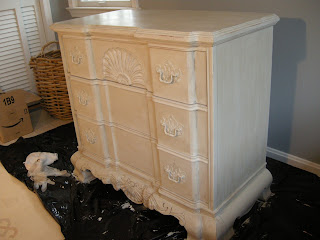 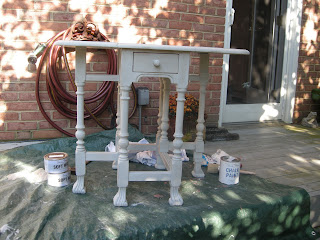 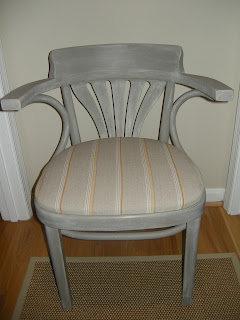 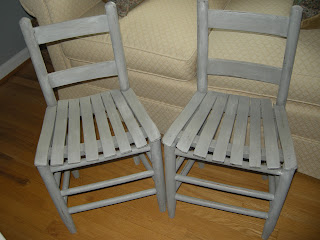 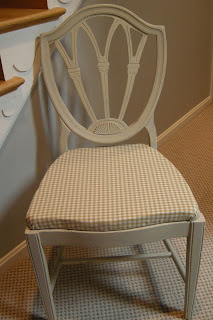 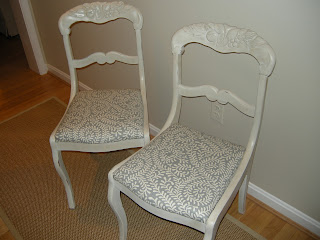 She was their own Christmas miracle, born on December 23rd, so premature that they said they could see her blood flowing through her little blue veins. The doctor thought she might not last the night. But she continued to breathe through one night and another, until early on Christmas morning the doctor declared her the Christmas miracle.
They named her Maria Josefina Angelita O’Rourke but they just called her Angel. She was a perfectly formed, perfectly beautiful infant—a little rosebud mouth, flawless white skin, black curly hair, shining black eyes, and tiny delicate hands—like a replica of her big sister’s Snow White doll. People stopped breathing for a second when they saw her.
And like the child who was born nearly 2000 years before her, Angel grew and became strong, filled with wisdom. She was a delight to her family. By the time she was one year old, she had caught up with biggest babies her age. By the time she was entering kindergarten, she had surpassed her older sister in both height and weight and she was nearly as big as her diminutive grandmother. By the time she was in sixth grade, she was bigger than most of the high school boys, even bigger than some of the football players. Her grandmother had to disassemble three extra-large school uniforms to have enough fabric to sew one uniform for Angel. Yet she was still stunningly beautiful—like a giant Snow White statue. People stopped breathing for a second when they saw her.
We all know people can be cruel in the presence of an unusual person like Angel O’Rourke. Children pointed and laughed, often played tricks on her. One day in the cafeteria, Joseph Ruppert stuck out his leg and tripped Angel while she was carrying her food-laden tray. She lost her balance, sending the spaghetti, meatballs, Jello, and chocolate milk over half her sixth-grade classmates. And she twirled around as she hit the floor, her fall broken by the scrawny body of Joseph Ruppert. He was face-down on the tile floor, covered with food debris and that mountain of childhood Angel O’Rourke. Joseph Ruppert was soon to learn that his shoulder was dislocated and three ribs were broken. It was a brief moment in time that Angel would never live down. Henceforth she was called the Bone Crusher.
In the weeks before her 13th birthday, Angel’s family suggested they plan a big celebration, inviting all of her friends from her class.
“But, Mama,” she said, “I have no friends in my class. Have I ever been invited to one of their birthday parties? You know I haven’t.”
Her grandmother pleaded with her, “Angelita, you need to be a friend to make a friend. Invite them. We’ll have a nice party and they will see you smile and they will know you. Just do it for me and you will see.”
“I don’t know about this,” said her sister Linda. “This has disaster written all over it.”
Angel paced the floor and broke out in a sweat. She looked down at her grandmother, her hands clasped at her chest as if in prayer, and she agreed to have the party. She immediately regretted it but she couldn’t back down.
On the day of the party, she begged her parents and her grandmother to disappear into the background before the guests arrived. They reluctantly agreed. The house was decorated with Christmas lights and a nativity scene and purple and yellow streamers. A big banner announced “HAPPY BIRTHDAY ANGEL” at the front door.
Angel was wearing a pink sequined top and a red taffeta skirt. Linda was dressed all in black. The other guest, wearing her best yellow party dress, was their 10-year-old cousin Rosie. The three girls sat in the living room, Christmas music blaring on the stereo. For over an hour they kept replaying the same three records over and over. Andy Williams was singing—again—“It’s the Most Wonderful Time of the Year” when Angel walked over to the stereo and pulled the plug out of the wall.
“How can he say that?” she cried. “For me it’s the most terrible time of the year. I hate my birthday. I hate Christmas. They all hate me and I hate my life.”
Her sister left, her cousin left, and Angel sat alone in the living room watching the lights blink on the Christmas tree. She noticed the heart-shaped ornament on the tree, an ornament on which her grandmother had lovingly embroidered “Angel 1948” the year she was born. And she wondered how her grandmother had controlled her own enthusiasm over the birthday party. Angel had fully expected her grandmother to sneak in to meet her “friends” but she never appeared.
Angel sang happy birthday to herself, cut a piece of cake, and put the cake on a poinsettia paper plate to bring to her grandmother. The old woman was not in her room. She wasn’t in the basement folding laundry. Angel called out to her, but her grandmother did not answer. She went into the garage and saw her grandmother on the floor under large metal storage shelves that had fallen on her. Angel dropped the cake and, as if she was only lifting a paper bag, lifted the shelves off of her grandmother.
“Angelita,” said her grandmother. “I knew you’d come for me. It’s another miracle!”
No comments:

This morning I was walking outside. The sky was bright blue, the changing leaves are in full color, and no trick or treater vandalized my car last night. Life is good. I breathed in, I breathed out, praying that I could learn to focus on life’s joys instead of the sorrows. And I realized that in difficult times my frail human nature causes me to question God’s wisdom. I wonder how He can allow such hardship. What kind of God would let His children suffer and die? How can an all-powerful God be so unfeeling to let there be war and famine and cancer and murder? Did He really intend for life to be so hard? How can I have trust in a God like that?
Yet when things are good I say that I have been blessed, that God is with me. I think He’s good when things are going my way.
Has God changed? Of course not. I am the one who changes. By nature, God is constant. He is good all the time and He is with me all the time, even when I doubt His existence or question His wisdom. I fail. God doesn’t.
No comments: