“  . . . let us draw near with a true heart in full assurance of faith. . .” Hebrews 10:22
Tonight I did yoga, then sat quietly on the floor, listening to Gregorian chant and pleading with God to let me feel the peace of His presence. Mike is dying and I can’t bear the thought of never seeing him again. When he goes he will leave behind a big hole in my heart and my life.
I’m so tired of death—in the span of one year my father died and my brother was murdered. And now Mike is slipping away. “What is it you want of me?” I cried to God in desperation. “How do you expect me to hold on to this faith of mine when life hurts so much?”
Then the words just came to me . . . blessed assurance. I have His blessed assurance.
There’s an old Christian hymn called Blessed Assurance, but we never sang that hymn in church when I was growing up—it was much too old-school Protestant for us baby boomer Catholics. But even though I am not that familiar with the old hymn, I love the concept of having blessed assurance. I need to feel God's presence, need to focus on trusting in His goodness, need  to have faith that He is with me through all of these awful trials of life, that His peace is all I need.
No comments: 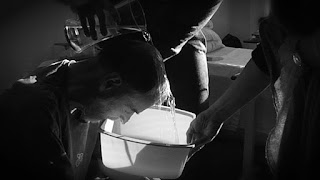 Although this has been a big part of my life for over a year, I have written little about it. I didn’t want to invade his privacy. The story isn’t over yet but it bears telling at this point.
My dear friend Mike first got sick in October, 2010. One week before Christmas he got the definitive diagnosis. He has mesothelioma, cancer caused by exposure to asbestos. Mesothelioma has a dire survival rate; it’s almost always terminal. He had chemotherapy, surgery to remove his right lung, and intense radiation therapy. Despite all the treatment, by the end of the summer the doctors told him the cancer had spread to his abdomen and the only course of therapy left was experimental chemotherapy. Mike decided not to get further treatment in order to live what may be left of his life as best he could, without being sick from chemotherapy.
He had to leave his job, sell his house, his horses, his power tools, and several of his instruments. He whittled down his possessions to only what could fit in two small rooms. And he lost the once-strong body that could wrangle horses or pick up a heavy gate and throw it in the back of his pick-up truck. He used to be strong and self sufficient but now he is occupying a body no longer his own, a body barely recognizable as Mike. In early spring, before his surgery, I took him to see the river at . There, in view of the falls, he sat on a bench and bemoaned what had happened to his body. “I used to climb mountains,” he said.
I’ve been praying for him. Praying that the Lord would have mercy and heal him and praying that the Lord would give Mike some peace, some understanding, and, if He was feeling really, really merciful, that He would give Mike faith. I had a whole army of people praying with me.
Mike went to church with me a couple of times. He liked the preaching, appreciated the prayers on his behalf, but eventually he made it clear to me that he just wasn’t interested in organized religion. He said, “Nature is my cathedral.”
I kept praying, not even knowing what to pray for. About two weeks ago I wrote this on a sticky note: “There’s just one prayer now. Lord, if he is in need of witness to get to salvation, please make it happen.”
One week ago today, Mike expressed an interest in seeing my pastor. Two days later, the pastor and I drove from to (about 70 miles each way) to see him in the nursing home where he is now living. Mike had a lot of questions for the pastor, questions about God and prayer and why he was dying. The pastor prayed for him, read Scripture, and simply talked to Mike about what he has been through and what he believes. Mike said that the past year had been the worst year of his life, but even more so the best year of his life. He said he feels blessed because so many people care for him and are praying for him. And he had come to the conclusion that such blessings had to come from God. He said the pastor had given him a lot to think about, that he just needed some time to digest all of it. After two hours of discussion, as we were wrapping up and heading for the door he surprised us. He said, “I have just one more thing I want to say to you. I do believe in Jesus Christ.”
He cried; we cried. The pastor prayed again and we left. In the following days, Mike told me he was learning to pray. He realized that God already knows what’s in his heart—he doesn’t need to find the right words to say, he just needs to feel God’s presence. He said he felt peace just washing over him. “I can’t believe it,” he said. “It’s real. It’s real.”
His favorite Bible verse so far, the one that caught his attention, and the one he says he reads over and over again is Romans 6:23—“For the wages of sin is death, but the free gift of God is eternal life in Christ Jesus our Lord.” It gives him an understanding of why he is dying and a hope for perfect bliss beyond this flawed mortal life.
So he said he wanted to be baptized. And two days ago, the pastor and I drove back to with a bottle of generic brand spring water and Mike got baptized. He said he believed because the blessings of his life had to have come from a loving God, that God was serving him, that he was just beginning to learn how to accept such love, the love for him that sent Jesus to die on the cross for his sins. He said many other humble, insightful things, things that I never thought I would hear coming from him. He, a man whose body has nearly totally failed him, said the day of his baptism was the best day of his life.
And after he was baptized, I kneeled on the floor beside him and held him. He said, “You’ve taken me on some great adventures, but this one is the best of all.”
Indeed, the best adventure of all.
I am in awe of the goodness of God and I ask Him to continue to bless my dear friend.
No comments:

ERROR!!! it flashed in bold, angry red letters. I stepped off the scale, kicked it gently, rearranged the fat on my body, and stepped back on. ERROR! it screamed in an accusatory tone with a tinge of petulant whining.
Had it been able to utter anything other than the rather rude ERROR message, I’m sure it would have called me an obese ignorant slut. I disagree with the slut accusation. There is no defense for ignorant and obese. Guilty as charged.
Had it not been disabled from the sheer full force of my weight, it might have flipped over and turned its back on me in disgust, continually flashing ERROR ERROR ERROR to the tile floor below.
But no, it said nothing, did nothing. I stepped off and the message disappeared. I didn’t have enough courage to try it a third time. I got the message.
Yes, I’m mired and suffering the consequences of the error my ways. And I’ve got the feeling that tonight, when I’m trying to sleep, I’m going to hear that wretched piece of metal in my bathroom, a voice that sounds like Satan, saying, “ERROR, ERROR, ERROR . . . ”
I may need to kill the thing.
No comments:

Had I known this soup would turn out so well, I would have paid attention. I would have measured, adjusted, and written down what I did. But, alas, I was just cleaning out my pantry, trying to use up what I had while making something reasonably healthy and comforting on a cold winter day. Oh, well . . .
Here’s the general idea:
Chop one onion and sauté in olive oil in a large soup pot. Add some minced garlic and a lot of minced fresh ginger.
Put about 8 cups of water in the pot, heat until it simmers, add about 6 teaspoons of Penzey’s chicken soup base.
Chop a few stalks of celery and a few carrots and add to the pot with chopped fresh parsley.
Take a package of chicken tenders (raw), cut into large pieces, and add to pot.
Add one can of white beans.
When the chicken is cooked and the vegetables are tender, add one package of Stove Top chicken stuffing mix and heat through. Really, the stuffing mix gives it body and makes it very flavorful.
1 comment: