“The sky was a strong, plain blue, but the light was cool and indirect and the shadows black and precise.”

Feeling restless and I need to write something, anything. It’s going to be a freewriting day. [Let me explain again what I do. Without looking, I grab a book from my bookshelves, open to a random page, put my finger down, and find a sentence. That sentence becomes the final sentence in whatever piece I write. I don't go back and rewrite, don't do paragraphs, just let something come out. When I start writing I never know how I'm going to get to that sentence.]

“Mr. Fish, perhaps to compose himself, was humming the tune to a familiar Christmas carol.”

The most remarkable thing about Orville P. Fish was his ears—huge bulbous ears with earlobes nearly reaching his shoulders, ears far out of proportion to the rest of his body. It seemed that he tried to distract attention from those monstrous ears by letting his hair grow long on the sides. But he was three-quarters bald and the skimpy hair on the sides of his head could never hide those ears. He had the beady eyes of a civet and a pencil-thin mustache just above his upper lip that appeared to have been drawn carefully with a charcoal pencil. He was a short sinewy man who wore the same clothes every day—a white shirt buttoned up to the neck and shiny black trousers belted much too high above his waist. He never smiled, never laughed, barely spoke to anyone in town. One could say that Mr. Fish was not a loveable man. Mama used to tell me that everyone had once been some mother’s angel child and I must try to see the good in everyone. So I tried imagining Mr. Fish as baby and all I could see was those beady eyes and those horrific ears. I wondered if he had the mustache when he was a child. I wondered if his mother dressed him in white shirts and black pants pulled up under his armpits. Even as an imagined baby, he was a fearsome sight. For as long as I could remember, Mr. Fish drove the local Wonder Bread truck, delivering bread to markets and diners all over the Eastern Shore. That’s really the reason that the story came out. Mama’s cousin Billy McEntee moved to the other side of the bay, down near Lusby, and he had a Wonder Bread route too. Billy used to tell us stories about delivering bread to Peaceful Shores, a nudist colony that was part of his route. It was a Saturday morning just after Thanksgiving and Billy was delivering an order of bread to the kitchen at Peaceful Shores. Christmas music was playing in the adjoining dining room and some of the members were putting up a Christmas tree and stringing multi-colored lights around the room. Billy was saying goodbye to the cook when he came out of kitchen door, smack dab into the bare buttocks of a man on a ladder stringing lights. The ladder wobbled a bit and the man stepped down and turned around, chuckled, and said, “Whoops, almost got me there, but I’m okay, I’m just fine, it’s just part of the spirit of Christmas.” There was no white shirt, of course. There were no black trousers pulled up to the armpits. But the beady eyes, the mustache, the hair, and the ears—those one-of-a-kind monstrous ears—were unmistakable. It was Mr. Fish in all his natural glory, wearing what he was wearing when he came into the world as his mama’s angel child. His civet eyes froze when he saw Billy. Billy said not a word and quickly gathered his empty bread trays as Mr. Fish climbed back on the ladder. Mr. Fish, perhaps to compose himself, was humming the tune to a familiar Christmas carol.
No comments:

On Sunday Pastor Mark spoke about going from a cognitive understanding of faith to a true heartfelt faith, the concept that in order to get true faith we must first “yearn to yearn” for God. We must want Him; we must want to believe. We must understand the difference between having doctrine and living doctrine.

I was reading a Jewish website (aish.com) where a reader wrote asking the rabbi how to have faith. Here’s part of the response:

A young man, a congregant of our synagogue stood spellbound as he watched my brother-in-law Rabbi Shloime, of blessed memory, totally absorbed in and transported by the experience of prayer. At the conclusion of the services, he approached Rabbi Shloime and asked him how one can access the remarkable level of connection and faith that he had witnessed. Rabbi Shloime replied "with a lot of hard work."

Most of us erroneously assume that the most important things in life such as spirituality, love, creative inspiration, etc., should be spontaneous -- a flash, a gift, a bestowal. We are a culture that is paying dearly for the terribly misguided romantic notion that relationships can be engaged and based on the "love at first sight" premise. We believe that creative endeavor can be successfully negotiated by a mere flash of inspiration, without the requisite input of toil.

I am not surprised by this response. Anyone who wants something badly enough must learn that hard work will be required. Yes, faith is a gift, a blessing bestowed on us through the grace of God. And how do we work toward that kind of true heartfelt faith? We pray. We pray, we read Scripture, and we pray some more. We find stillness and listen for God. How can He deny a struggling soul who truly wants faith and works hard for it?
No comments: 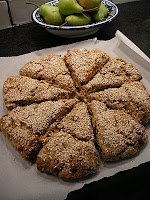 The heat index today is something like 120 degrees. I'm exaggerating, but not by much. So what did I decide to do? I cranked up my oven and baked. Sometimes things I do make absolutely no sense.

I was determined to duplicate (or even improve) a date almond sesame scone that I bought from the baker at the local farmer's market. The first one I bought was so delicious that I went back the next week and bought another and asked the baker what was in them. "Dates and almonds," he said with a sly grin. No more details. I could see the sesame seeds so I had at least three ingredients figured out.
So I searched online and found a recipe that calls for 50 grams of treacle. I didn't know what treacle was (sounds like seaweed, but I discovered it's a form of corn syrup) and I had no idea how to measure 50 grams so I totally improvised. They're good, but not quite as good as the baker's scones. I'm going to have to buy one again this week and see if I can figure out his recipe.
Here's what I did.
Date Almond Sesame Scones

I just finished reading Donald Miller’s book, “A Million Miles in a Thousand Years”—highly recommended. He writes about how each of us has an opportunity to compose the story that is our life. The book got me thinking about what I’ve done with my life until now and about what I would do to live a better story for whatever time I have left on this planet.

So far in this lifetime I’ve had successes and failures. I didn’t do so well with the marriage, but I think I had tremendous success being a good mother. Being a mother was my primary career until the children were grown. But the career outside the home faltered. Last year my employer changed my status to “as needed” and I’ve been needed only two weeks in the past 15 months. I realize this is my opportunity to do something else, to find a cause, something that touches my heart, somewhere I really am needed and devote my energy to that new endeavor. Still it scares me.

What happens when an old butterfly past her prime leaves the safety of her cocoon? Will her wings fail? Will a sassy young crow swallow her whole? Or will she start fluttering those wings as best she can and create a new life? If she doesn’t take the chance she’ll never know. It’s time for me to take that chance and figure out where I am needed, even though I’m scared. I need to write a better story for this part of my life.

There’s a seminar in Portland, Oregon, in late September called Living a Better Story. (You can get information on the seminar at www.donmilleris.com/conference.) I would love to go to the seminar. Maybe it can help me learn to use those old wings.
No comments: